Wooden stud walls have to be properly shear braced with structural construction panels in accordance with the local code such as the International Residential Code. The basic rule of thumb is to have a minimum of 4′ of 7/16″ OSB on each corner and no less than 25′ apart. The panels should be continuous from top to bottom. Since panels are only 8′ tall a row of blocking in the stud wall will allow for joining sheets to both be nailed into and therefore be considered continuous. The 2012 International Residential Code has many tables containing a great deal of information regarding other considerations such as wind speed, seismic zoning categories, and situations where 4′ cannot be obtained off each corner such as on a garage.

Outside walls on both commercial and residential applications require some sort of shear bracing. This is to prevent the wall from “racking”. This sort of bracing gives a building a large percentage of its overall strength so it is very important this is done right. Some walls are designed specifically by engineers to be placed in a certain location to add strength to a structure and are termed “shear walls”. Close attention should be payed to the blueprints on such walls because they may call for a specific size and type of structural panel such as 3/4″ CDX.

The best way to accomplish shear bracing is with structural panels after the wall has been framed. A much better job with a great deal more strength can be built like this. It is also practically a sin to turn structural panels, with a strength axis, upright on a stud wall. This does very little to keep the studs from crowning and if exposed to moisture, then it runs the risk of the panel itself warping. You would not orient panels in such a manner if you were decking a roof, the weakness would be obvious. It is also easier to straighten the studs when the sheets are run horizontally. However 90% of builders will do just the opposite. Most code books and construction manuals also show the panels installed completely wrong. 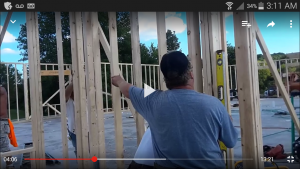 Before any wall bracing of any kind can be done, every corner must plumbed and the walls should be straightened. Make certain all offsets line up or are at least parallel. Remember that to establish a continuous panel from top to bottom a row of blocking in the stud wall must be installed and each panel nailed into it. The most popular form of structural panel is 7/16″ OSB. The sheets should be nailed every 4″ in the joints and 8″ in the fields with 8d nails only. Staples simply do not hold well enough.

To take all of this one step further, it is better to start the sheathing on homes with wooden floor 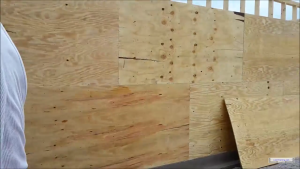 system right on top of the mud sill. Also make certain on two stories that a whole sheet will nail into the studs on each level. This will bind the entire structure together much better and if done properly, shear bracing a wooden stud wall with structural panels will prove itself far better and more efficient than any other method such as metal wall bracing or 1 x 4 “X-bracing”.