Learn how to stud up a gable wall safely, efficiently, and in accordance with the 2012 International Residential Code using this fail safe method. These advanced framing techniques work whether the gable is being stick framed, box framed, or prefabricated.

Stud up a Gable End Wall

The first step for building any gable wall is to find the center of the rafter span. This is equivalent to a plumb mark directly below the center of the ridge. A word of caution however, do not plumb down from the ridge to get this mark. It is is too easy to get variations when trying to plumb something of any substantial length. Use rafter run measurements for more accuracy.

If they are are adjacent, then it will be a simple matter of nailing the most adjacent joist directly to each of the gable studs. If they are opposite, then it is important to realize all lay out options. Ideally, the studs stack directly over the studs on the outside wall below. The ceiling joists should bee laid out accordingly. The ceiling joists should attach directly to one side or the other of the gable studs. There is generally no need of using a rim joist (band) for the ceiling joist to attach to. It is a waste of time and material.

No matter the direction of the ceiling joists or the building codes governing your area, it is a good idea to attach a wall plate to the bottom of the gable rafters. This will serve as the top plate of the wall. There is no need to notch the studs, or set the gable rafters inside of the wall. Both of these techniques waste material and labor.

It is also a good idea not to use 2 x 4 studs over 10′ tall. If the gable wall is taller than 10′, then use a standard double top plate to break up the wall. Brace these taller walls thoroughly with permanent 2 x 4’s on about a 30º. Place them every 4′ and use three nails in each end.

In applications where there are no ceiling joists, such as rooms with cathedral ceilings, the studs should go the entire length with no breaks. It is important to realize that they will be under more stress from lateral forces (wind) than vertical. Refer to Table 602.3(5) of the International Residential Code for determining stud sizes or just remember not to go over 10′ with a 2 x 4 or go over 16′ with a 2 x 6.

Lay out the bottom of the gable wall. Make sure to always work from the long point side of the studs. For applications requiring studs only, use one of these calculators to solve for the length of the studs.

Use the center mark to lay out for any openings. On large walls with windows opening, attach a string from the center mark on the bottom plate to the center of the ridge beam. Use this as a reference to lay out everything. This is the only bulletproof method for laying out openings on large gable walls. remember that headers must follow the same guidelines as they do for any exterior wall. Use double cripples on anything 5′ or greater.

Use a circular saw set on the correct bevel to saw the studs. A speed square is a handy tool to determine the what degree to set the saw on. Use a minimum of three 3″ x .120″ in each end of the studs. 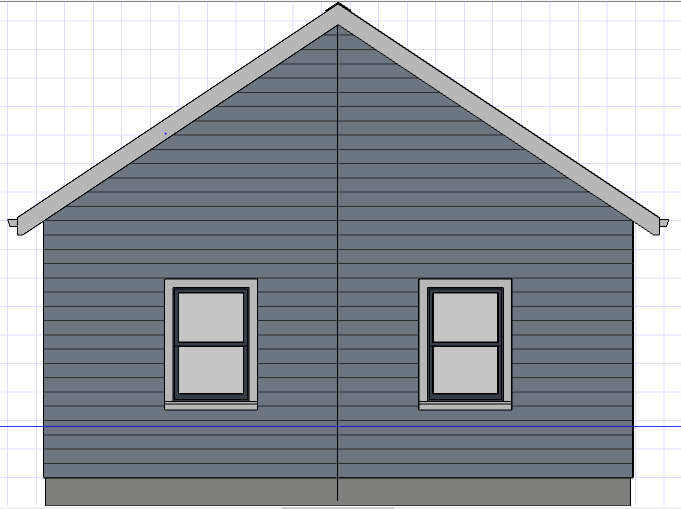 The vertical line in the center of the gable represents the string that every framing member must remain parallel with.